based on the memoir Twelve Years a Slave by Solomon Northup

Based on the real experiences of Solomon Northup, a free black man in upstate New York who was kidnapped and sold into slavery in 1841, 12 Years a Slave is not your typical Hollywood based-on-a-true-story bullshit. Kudos to director Steve MacQueen (2011’s Shame) for not turning away from the more lurid and shameful aspects of this period in American history. I can count at least three times in which I grimaced in disgust – for a film to elicit such a gut reaction in me, it must be doing something well. 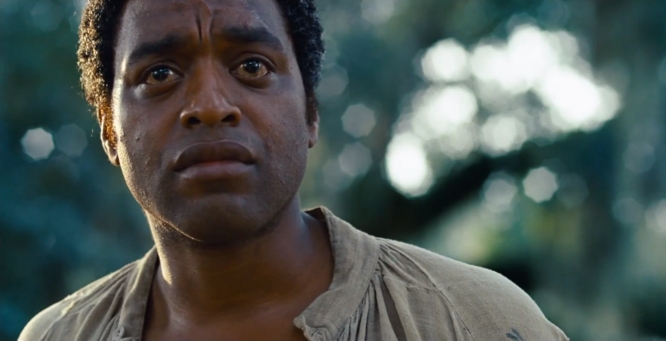 However, 12 Years a Slave fails somewhat in other crucial areas. The lead performance by Chiwetel Ejiofor is a bit distant and tentative, and I never felt fully immersed in his twelve-year ordeal to regain his freedom. I also found some of the other characters to be too simplistic, from Paul Dano’s over-the-top abusive slaver, to Brad Pitt’s cameo as a righteous carpenter who proclaims to plantation owner Edwin Epps (Michael Fassbender) that slavery is just plain wrong. No shit. And then there’s the obvious, manipulative Hans Zimmer score: Requisite string motif for plaintive, sad sequences, and dissonant brass attack for violence and suspense. Subtlety goes a long way.

Make no mistake, 12 Years a Slave is still essential viewing, if only for the brave, no-holds-barred turn by Lupita Nyong’o as a slave named Patsey. The moment where she pleads Epps not to whip her for having left the plantation so she could get a bar of soap is as harrowing, human, and honest as I’ve seen in a very long time. She walks away with the film… and with our hearts.