based on I Heard You Paint Houses: Frank “The Irishman” Sheeran and Closing the Case on Jimmy Hoffa by Charles Brandt

After much anticipation, director Martin Scorsese’s long-in the-making gangster drama The Irishman arrives with not so much a bang but a whimper. Based on the alleged confessions of hitman Frank Sheeran, the narrative follows Sheeran’s evolution from truck driver to killer for mobster Russell Bufalino, as well as his alliance with Teamster boss Jimmy Hoffa. And damn if this production doesn’t boast an impressive cast and crew. There’s Scorsese, of course, the man behind one of the best mob flicks of all time, Goodfellas (1990). There’s Academy Award-winner writer Steven Zaillian, responsible for another one of my favorites, Searching for Bobby Fischer (1993). And there’s the trifecta of powerhouse actors Robert DeNiro (Sheeran), Al Pacino (Hoffa), and Joe Pesci (Buffalino), coaxed out of semiretirement after almost a decade away. So what the hell happened? 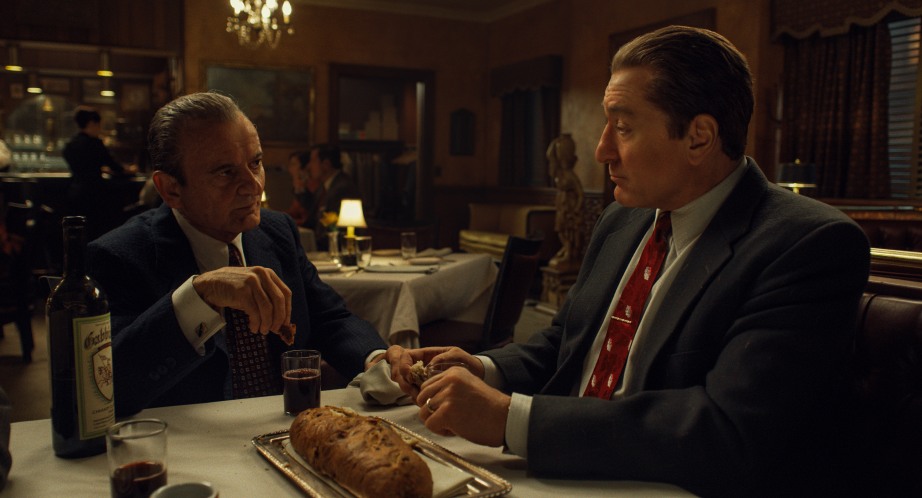 Beats me. Maybe it has to do with the de-aging process used to make the three actors – all close to 80 – younger in the film’s flashbacks. The illusion feels half-assed, particularly because the de-aged faces look nothing like what DeNiro, Pacino, and Pesci did look like in all the movies we’ve seen them in – it would’ve probably worked better to cast other actors that resembled them. But I think the main issue here is more a lack of focus. The Irishman is ultimately about a man who, in the twilight years of his life, looks back at all the horrible things he’s done and has to live with them. But for my money, DeNiro and Scorsese fail to elicit the tragic arc of Sheeran’s evolution from delivery boy to ice-cold assassin… and that’s a big problem. We never know what makes this guy tick, and even his bond with Hoffa and the eventual betrayal of his trust (Sheeran claimed he killed him), comes across as underdeveloped and hollow.

One of the most compelling themes of crime cinema, from Scarface (1932) to The Godfather Trilogy (1972-1990), is how the pursuit of the American dream leads to personal destruction. Scorsese is no stranger to these waters, having Goodfellas, Mean Streets (1973), Casino (1995), Gangs of New York (2002), and The Departed (2006) under his belt. In trying to explore the hell of getting old – of realizing your existence on Earth has caused nothing but pain – The Irishman goes for something different… but mostly arrives at more of the same. It could’ve been a contender.