There’s a sequence early on in Sicario where a team of FBI and Department of Defense agents go into Juarez, Mexico to extract a drug cartel boss for questioning. As their convoy makes their way back to Texas, it becomes evident they’re being followed. Then the SUV’s get stuck in traffic… and director Denis Villeneuve ratchets up the tension to the point where I was actually squirming in my seat, waiting anxiously for the impending outburst of violence. It’s a masterful scene, a veritable punch in the gut. 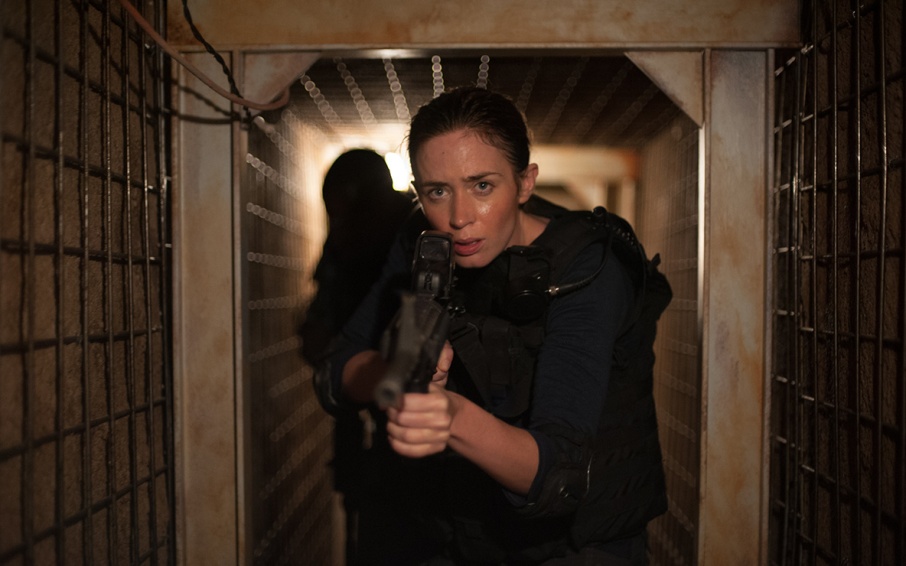 Just like he did with his earlier films Prisoners (2013) and Enemy (2013), director Villeneuve is interested in ambiguity. He relies on Roger Deakins’ moody cinematography – all desert yellows and bird’s-eye views – and Jóhann Jóhannsson’s unnerving score to create a morally ambivalent, nerve-racking tone. It works nicely, aided by superb performances from Benicio del Toro and Josh Brolin, oozing menace as shady government men.

Less convincing is Taylor Sheridan’s script, particularly in its depiction of an upright FBI operative (Emily Blunt) whose bad decisions and perpetually confused demeanor come across as rather witless (get drunk and have sex with a dude who turns out to be working for the cartel, why don’t you?). There’s also a dubious climax in which del Toro’s purpose becomes clear and he exacts revenge on a drug lord and his family by infiltrating the kingpin’s heavily guarded compound… alone. But then again, when the ride is as slick as this one, who cares?