written and directed by Jordan Peele

Us opens in 1986 with a little girl named Adelaide (Madison Curry) who one night wanders into a funhouse at a beach in Santa Cruz and comes face to face with a girl that looks exactly like her. The experience traumatizes her. Thirty-three years later we see Adelaide (Lupita Nyong’o), now a wife and mother, vacationing with her family at their lake house near Santa Cruz. Her husband Gabe Wilson (Winston Duke) can’t understand why she doesn’t want to hang out by the ocean. She seems anxious and overprotective of daughter Zora (Shahadi Wright Joseph) and son Jason (Evan Alex). And as the memories of her encounter bubble up to the surface, four menacing silhouettes appear in the driveway. They force their way in. They terrorize the Wilsons. And they look… exactly like them. The leader of this creepy gand of doppelgängers? Her now-grown childhood counterpart. 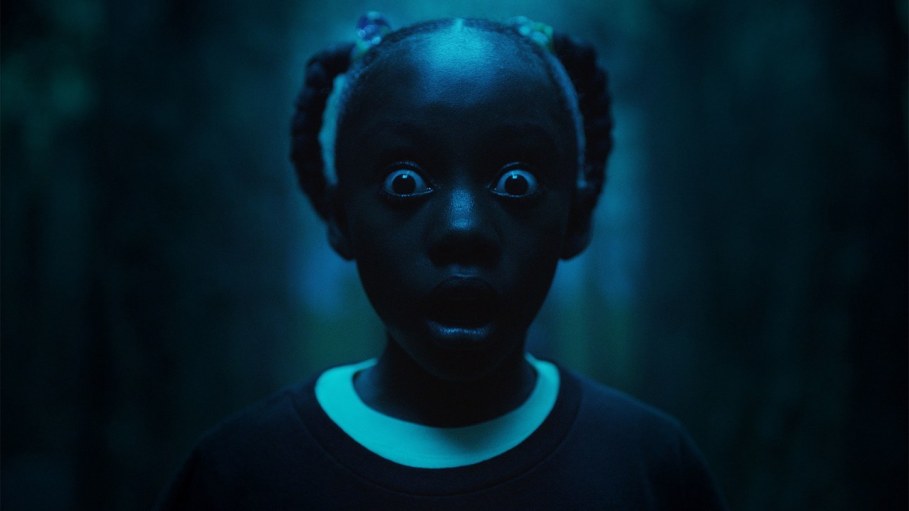 It’s an interesting Twilight Zone-ish premise. As the film progresses, we find out everyone has a dark twin called a “Tethered.” And now these opposites have escaped from underground facilities all over the United States, intent on murdering their human equivalents. When the tethered are asked who they are, Adelaide’s duplicate answers, “We’re Americans.” And that’s indication enough that writer/director Jordan Peele has much more on his mind. Us is home invasion thriller, quirky comedy, study on duality, and class injustice primer all rolled into one, a B-movie with artsy leanings where the climactic battle between the two Adelaides is choreographed to an orchestral arrangement of Luniz’ hip hop classic I Got 5 On It (1995). Along the way there are references to the Bible, Hands Across America, and even the cult film C.H.U.D. (1984).

I really wanted this hodgepodge of ideas to work, but Us feels too jumbled and ambiguous, both narratively and thematically, to pull it off. Can’t blame Peele for trying, specially when he was able to pull off a similar juggling act with his 2017 horror/satire hybrid Get Out. But this time he shoots all over the place. He may be having fun with the tropes of the genre in order to tell us something important about the human condition. What exactly he’s trying to say, though, is anyone’s guess.