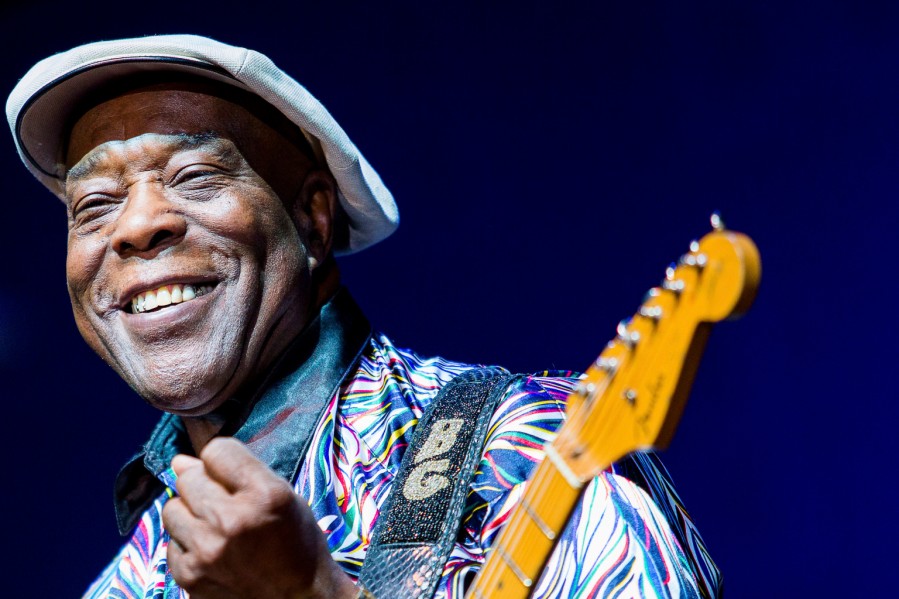 Legendary bluesman Buddy Guy let it rip at the Hard Rock Live last night. He’s 79… and still a badass. My friend Gerry and I chatted about it today for his music blog. You can check it out right here too.

Gerry: We saw Buddy like 10 years ago at that blues festival, how much of that do you remember?

Carlos: I actually enjoyed that more than last night, mostly because of the venue. The fact that it was outdoors and he was the one to close the festival. Where we were sitting last night was just horrible. Having said that, I remember his energy and showmanship being exactly the same. The man does not seem to age!

Gerry: Which is saying something because I think we both are generally not big on festivals and outdoor venues. But I honestly barely remember any details from the fest. I had just seen The Code Talkers and by the time I got to Buddy there was a large crowd. I do remember him jumping from song to song and doing the stuff with the guitar on his butt and the towel though. which could get cheesy, but he pulls it off.

Carlos: I think we were separated there, weren’t we? I remember standing on an elevated hill.

Gerry: Yeah, probably. I don’t think I’ve ever seen anyone else demonstrate complete mastery over their instrument the way he does. He is always in control of that thing. Last night I was right off upset that we were sitting. There’s something completely wrong about sitting politely for the blues.

Carlos: He definitely pulls it off. The way he talks to the audience, makes jokes. It’s definitely something to see. I haven’t seen enough bluesmen in my time, but I agree with you he’s a badass. How did you feel about the song selection?

Gerry: It was good overall because he stuck to doing a lot of standard blues numbers. I would have liked to hear some more of that instead of the super extended solos between him and his other guitar player, Ric Jaz. Not that they weren’t great, but maybe too many.

Carlos: Yeah, that got a bit repetitive. I did like pianist Marty Sammon’s solos, though. Almost made me want to go back to taking piano lessons. Except I obviously suck.

Gerry: Obviously. But sucky piano and sucky guitar is all we need for our band.

Carlos: I really liked the acoustic bit where he played bits of classic rock and soul songs. If the show had been just that, I would have liked it much better.

Gerry: Have you heard the acoustic stuff he did with Junior Wells in the 90s? That stuff is awesome.

Carlos: Yeah, the acoustic part was one of the highlights of the show. I haven’t heard the stuff with Junior Wells, I’ll have to look it up now. I really liked that moment when he went into the crowd, singing and playing as if it was that easy.

Gerry: That was the other highlight. I kind of wish we had been more motivated to follow him around the venue with all the old folks taking selfies. But I think the shitty crowd and lack of sight of the stage from our shitty seats had put us in a bit of a shitty mood. We weren’t our usual rock ‘n’ roll rebel selves.

Carlos: Agree. Then again we’re old. It’s quite possible the crowd would’ve trampled us. Even though they were older than us.

Gerry: Fucking old people always ruin concerts for us. As much as you hear people complain about “kids today” it’s always people older than us that are constantly getting up to go to the bathroom or talking or sitting down when it’s a fucking blues show and they should be standing! Stand up for the blues, motherfuckers!

Carlos: That reminds me of Bob Dylan and how you had to tell those two old ladies behind us to shut the fuck up.

Gerry: And that time we went to see Rodrigo and Gabriela and the old Brits were talking. Meanwhile, there’s Buddy, 79 years young, being a badass and cutting loose.

Carlos: When we walked out we were talking about how guys like Buddy, B.B. King, John Lee Hooker and others had eventually settled into a more “commercial” and polished way of playing, when perhaps their roots were more basic and raw. And I wish Buddy Guy had been a bit more like that, less “safe” if you will. What was that great point you made about the way they used to play vs the studio?

Gerry: That rough style we like that everyone imitates wasn’t necessarily on purpose. In a sense these guys were always playing this polished style in their heads. I remember seeing some documentary where I think it was Buddy himself or someone else that mentioned that when they didn’t have a mic, they would take a mic from a taxi dispatch place. They’d just rip it out and then patch the wires back together to plug into the P.A. system at the show or even the studio. So that distorted vocal you sometimes hear in old Chicago blues songs is likely because of that. But of course, that’s part of what everyone later picks up on when rock ‘n’ roll rediscovers the blues in the 60’s. And Jack White, The Black Keys and everyone has picked up on it too. It’s that garage aesthetic, but it was always out of necessity, not intent.

Carlos: It’s interesting how that evolution has come full circle. In any case, I was glad to have seen him. Hopefully next time he comes around, it’ll be at a less shitty venue than the Hard Rock. The Fillmore would be perfect. And with people who stand!

Gerry: The new album from People Who Stand.