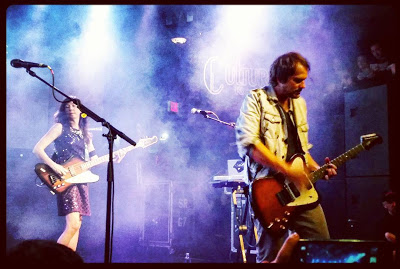 This week I was invited to write a review of the Silversun Pickups concert at Culture Room for Sound Affects. Check it out.

About five or six years ago, I was flying from Los Angeles to Ft. Lauderdale when, bored out of my mind from the almost five-hour trip, I decided to listen to some music from the in-flight selections. Among the usual pop crap, I happened upon a band name which sounded intriguing: Silversun Pickups. I pressed play on their album Swoon (2009). “The Royal We” immediately grabbed me, reminding me somewhat of Smashing Pumpkins with its fierce interplay between soft and loud dynamics and lead vocalist’s Brian Aubert’s half-whispered, half-snarled delivery. This was good stuff – hard-hitting, yet surprisingly melodic alternative-shoegazing-emo rock… or something of the sort. I don’t care about labels. All I know is by the time “Panic Switch” ended I was a huge fan. Thanks, Virgin Atlantic!

I hadn’t been able to see Silversun Pickups live until last Friday night, when they lit up the joint at Culture Room in Ft. Lauderdale with a set that upset everyone’s – song reference here – circadian rhythm with its relentless energy. From the first song “Cradle (Better Nature),” off their 2015 release Better Nature, the band was firing on all cylinders. I was actually quite curious to see how they would translate their heavily-produced studio sound to a live environment – whether they would be drowned out by the distortion and electronic effects, or if they would go for something rawer and more stripped down. Amazingly, the answer was neither and both. While the group certainly lets loose in a live environment, it was very interesting to see how, more than anything, they are about control. That cinematic give and take between delicate and harsh never comes across as forced, with the band members complementing each other at just the right level. And that was evident throughout the night as they filled the venue with their intense wall of sound.

Aubert projected both swagger and vulnerability as he wowed the crowd with his precise shredding and impassioned vocal delivery on songs such as “Friendly Fires,” his voice about to break on the verse “So who could ever break you down? / And what could ever freak you out?/ If you can carry this around / Then you will never break down.” Bassist Nikki Monninger is clearly a fan favorite, as the audience cheered her singing on the catchy “Circadian Rhythm (Last Dance),” her shy presence belying her strong sense of tempo – there’s no denying her playing is the glue that holds the band together. Behind the keyboards, Joe Lester expertly manipulated the atmospherics, and drummer Chris Guanlao rounded out the theatrics with an impossibly high cymbal that he would frequently crash with delight. By the time Silversun Pickups pummeled the audience with the one-two punch of “Latchkey Kids” and “Panic Switch,” Gerry and I were already about to collapse from the strain of standing for more than two hours and, well, being in our forties and out of shape. But the adrenaline kept surging and we soldiered on as the group played six more songs. By the end of the night, we were (almost) young again.

Later I found out that the setlist had included one of my favorite songs, “Cannibal,” but the band had replaced it in favor of a fan request, “Kissing Families.” While I would’ve loved to hear “Cannibal” live, the fact that the group opted to play a song from their debut EP, Pikul (2005), speaks volumes as to their craft and respect for their audience. During the chorus to “Nightlight,” we had all kept screaming the line “We want it!” Well, we got it. And now that it’s over, I want to get it all over again.