On mothers, music, and midlife crises

Old age crept up on me silently, stealthily, like the glacier that sunk the Titanic. There I was one day, dancing the night away at the hottest Miami clubs, surfing the pipelines of Waimea Bay, getting my picture taken with Scarlett Johansson on the red carpet. The next, I was already thirty-five and getting my first irritable bowel syndrome attack. Then at 40, I had my son Sebastián, and along with the incredible joy of that experience came another great gift: The constant worry, sleep deprivation, and total exhaustion. Don’t have kids.

So okay, fine, I didn’t really dance, surf, or walk the red carpet with Scarlett (never say never). And obviously, I exaggerate about the intricacies of parenthood (did I mention constant worry, sleep deprivation, and total exhaustion?). But what I didn’t realize was that getting older would be so much fun, or that a lot of it would be centered around one of my greatest passions: Music.

To tell this story right, I must go back a few years to my childhood in Puerto Rico. 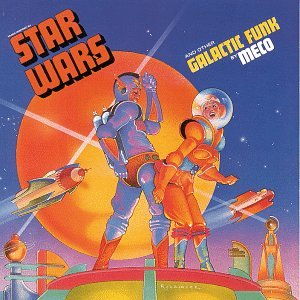 It was my mother Camille who first got me into music. I distinctly remember listening to stuff as early as five years old – children’s songs like La Casa Encantada and El brujito de Gulubú. I also had several LPs from Spanish boy band La Pandilla (for some reason, I never liked Menudo much, even though they were big local stars). But my prized possession was probably Meco’s Star Wars and Other Galactic Funk (1977), an infectious disco take on John Williams’ score for the blockbuster movie. I would conduct the invisible orchestra, standing in my room (or on the bed) and trying to remember all the tempo changes (I recently showed my son how to do this as we listened to my original album). 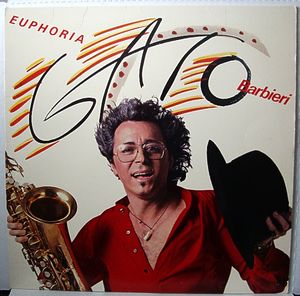 The cat from Argentina.

My mom would play music all the time: While doing her makeup, driving, cooking. She was into things such as The 5th Dimension’s Aquarius/Let the Sunshine In (1969), the pop-jazz stylings of Chuck Mangione, Herb Alpert, and Stan Getz, and bands like the Bee Gees and Hall & Oates. She liked happy music – still does. Songs that would make her dance and lift her spirit. But she also liked rock ‘n’ roll: Aerosmith, Def Leppard, Eric Clapton, Santana. On the other end of the spectrum was my dad Carlos, who listened to the type of things my mom would call “La lloradera esa” (“That crying stuff”): Latin bolero singers like Felipe “La Voz” Rodríguez and tríos such as Los Panchos. It was an interesting combination, and it all came to a head when my parents took me to what I believe was my first concert: Argentinian saxophonist Gato Barbieri at the Centro de Bellas Artes, circa the early ’80s.

The show was great, but the moment that sealed it for me was Barbieri’s live take on his then-famous Theme from Firepower (1979), released the same year on his album Euphoria and originally composed for the British film of the same name starring James Coburn. Watching Barbieri sustain those sax notes at the front of the stage – with an explosive array of horns, drums, and Latin percussion behind him – was an experience unlike any other. I was a convert: Music was just too damn awesome. 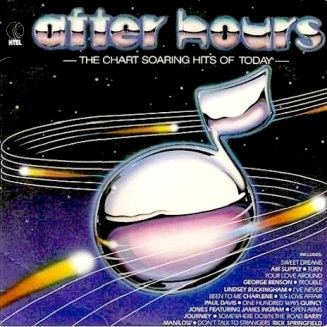 From then on, it was time for experimentation. My mom got me my first Panasonic turntable and the first things I bought were a 1982 K-Tel compilation called After Hours (it had Rick Springfield’s Don’t Talk to Strangers) and a 45 of Thompson Twins’ Doctor! Doctor! (1984). I tried new wave (Duran Duran, The Cars), hair metal (Bon Jovi, Dokken), prog rock (Rush, Genesis), fusion (Pat Metheny Group, Chick Corea), soundtracks (Jerry Goldsmith, Danny Elfman), and some salsa and merengue (Rubén Blades, Juan Luis Guerra). 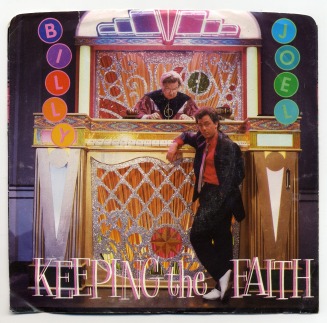 One of my more vivid memories is sharing some of my findings with my grandma Camila (my mother’s mom), playing her jazz standards from Charlie Parker and stuff like Carry On Wayward Son (1976) from the band Kansas. She would sit with me patiently, read the lyrics to the songs I played, and share in my enthusiasm – two of her favorite tracks were Billy Joel’s Keeping the Faith (1983) and The River of Dreams (1993). If you ask me, that’s one cool grandma and I miss her dearly.

On my 16th birthday or so, mom and grandma shelled out what I assume was a pretty penny for a Technics sound system complete with floor speakers and a double cassette player. I would spend hours sitting on a comforter on the floor of my room, making mixtape after crazy mixtape – metal would segue into pop, Latin rock into jazz, orchestral film scores into New-age. Good times.

By now I was already a teenager and my dad had not been around for several years (that’s a story for another time). What’s true is that my mother and I had formed a bond through music that lasts to this day – over the years we’ve seen many bands together, including The Rippingtons, Maynard Ferguson, Saga (always huge in Puerto Rico), and The Alan Parsons Project. We even arrived late to my senior prom because there was a Spyro Gyra concert that same night (and because who cares about senior prom anyway?).

So flash forward to now. One of the biggest joys of my life remains going to see live concerts, a passion I share with my wife Alexandra and some of my closest friends. There is just something very special about participating in the creation and sharing of music, even if only as part of an audience. And when all the pieces fit together – great venue, amazing sound, receptive listeners, the right amount of alcohol – something magical happens, An unwritten understanding between performers and spectators where the moment belongs to everyone present. I’m not big on crowds, but there is something to be said about the communal aspect of artistic expression. For a brief moment, the selfishness that characterizes our lives is forgotten and we share an appreciation for something that has united humans since the dawn of time: The creation and communication of music. 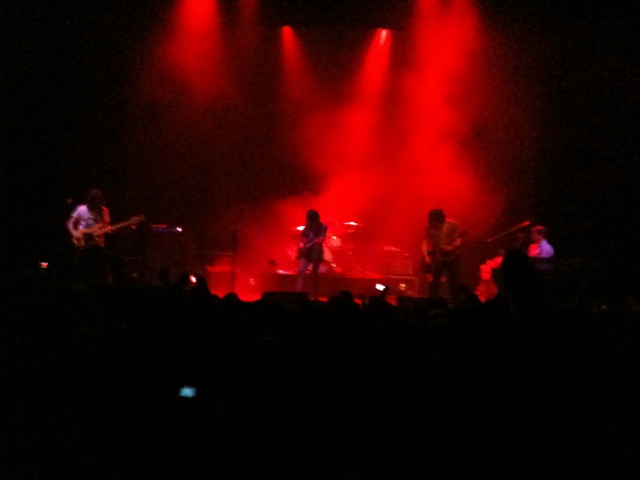 In 2010 my friend Gerry and I went to see Arctic Monkeys for the first time. We were already in our late thirties and he was a father by then (I would join the club a couple of years later). But there we were among all the horny teenagers close to the stage, jumping over things and hoping the Brianstorm mosh wouldn’t kill us (at one point I’m certain I saved a young girl from getting swallowed by the mass of bodies). At the end of the night one thing was perfectly clear: We weren’t young anymore. And that was fine, because we also realized we would continue to do this for the rest of our lives. (You can read Gerry’s hilarious recollection of the experience right here.)

Shortly after, Gerry turned me on to Black Rebel Motorcycle Club and we went to check them out at a small venue in downtown Miami. After the concert, we started to walk towards the parking area and ran straight into singer/bassist Robert Levon Been as he smoked outside. As fanboy geeks usually do, we approached him awkwardly and congratulated him on a great performance. Then we did something that surprised us even more: We asked him if he’d mind taking a picture with us. He graciously agreed, and afterwards in the car we couldn’t stop talking and laughing like giddy schoolgirls. 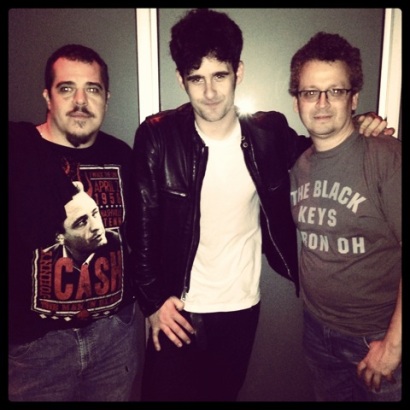 With our buddy Robert Levon Been.

Now, what was great about this moment was the fact that Been behaved like a regular guy, not like a rock star. And if we had been successful at talking (briefly) to him, wouldn’t that mean we could stalk, um, approach other musicians and take more pics with them?

The answer was yes. 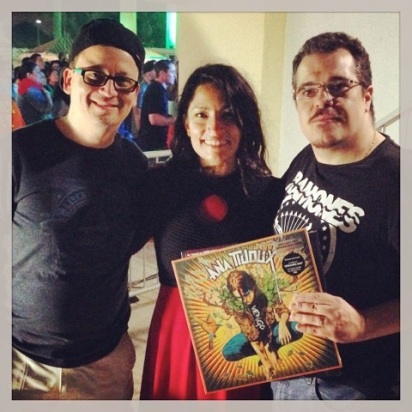 Since then Gerry and I have had the pleasure of meeting some great artists, all of which are aware of the importance of their fan base. Afghan Whigs frontman Greg Dulli shook hands with us outside a show in Orlando. At the same venue, we talked to singer/painter Joseph Arthur and later ran into him at a diner, where he thanked us for our support. Gerry almost lost his cool upon meeting the girls from Larkin Poe, and I almost lost mine taking a selfie with Taylor Momsen from The Pretty Reckless. Katja Toivola, trombonist for the Preservation Hall Jazz Masters, gave me great pointers for my review of their show in FDRMX. And after chatting for a little bit with Ana Tijoux, she told us it had been an “honor” to meet us. She obviously got it backward, but hey, we’ll take it.

Sure, these performers are not at the level of stardom of, say, a Bono or a Taylor Swift. And that’s all for the better, since they’re not as far removed from the audience that supports them. I never had the opportunity to play in a band (again, never say never), but my connection to music is an integral part of what gives meaning to my life, and meeting and talking to people who make music is rewarding in and of itself. So is this part of a “midlife crisis” of sorts? One that involves feeling younger by standing close to our favorite songwriters and bands? Who knows. At least it beats dorkily telling a young co-worker that you have a crush on her or getting a 323 horsepower sports car. And I won’t confirm or deny I’ve done any of those things. 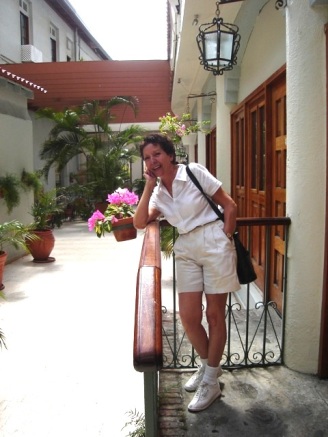 I owe my love of music to my mom, who planted the seeds. She’s almost 70 now but shows no signs of stopping. Her latest recommendation was, fittingly, Pharrell’s Happy. Thank you, mom. I could never convince you that King Crimson was a great band (“Ese grupo está descuadrao” / “That band is all over the place”), but I’ll be forever grateful to you for being the first person to recognize my interest in music and encouraging me to follow it. You rock.

You can click on the album covers and check out the songs.