Ever since watching their video for Dick in a Box (2006) in the Digital Shorts section of Saturday Night Live, I’ve been a fan of musical comedy trio The Lonely Island (Andy Samberg, Akiva Schaffer and Jorma Taccone). Their outrageous tunes – many sung with established artists – may be hit or miss, but they mostly touch my funny bone, from Natalie Portman spouting F-bombs in Natalie’s Rap (2006) to Justin Timberlake waxing poetic about banging your best friend’s mom in Motherlover (2009). Hell, Threw It on the Ground (2011) might as well be my theme song for every time I get pissed off at work. 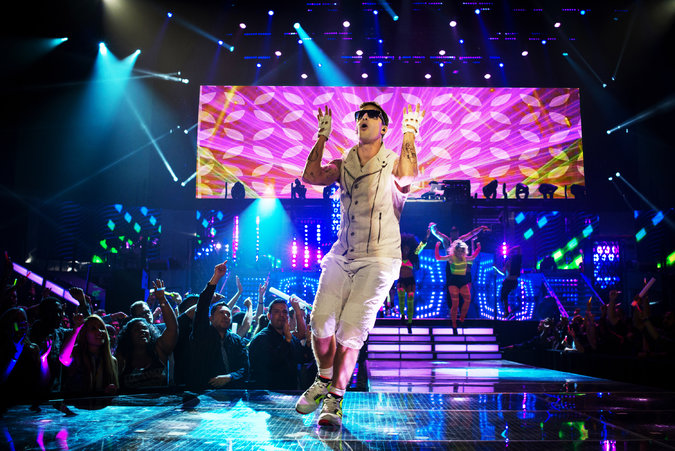 Popstar: Never Stop Never Stopping is the gang’s excursion into mockumentary territory, with a story that follows the rise and fall of pop singer Conner4Real (Samberg), a clueless and untalented douche who nevertheless commands legions of fans. When his fame start to wane, Conner goes on a big downward spiral… until redemption arrives in the form of childhood friends Owen (Taccone) and Lawrence (Schaffer), who remind him that bros always come before hos, even when you’ve been a jerk (it’s rather sweet, actually).

Along the way, celebrity culture is skewered, singer Seal gets mauled by wolves, and we are treated to songs such as Finest Girl (The Bin Laden Song), with its refrain “She wanted to fuck me harder then the US government fucked Bin Laden.” Oh, and a penis gets slapped against a limousine window. It ain’t exactly subtle, but it is pretty hilarious.