from a story by James Mangold and David James Kelly

based on the X-Men comic books by Stan Lee and Jack Kirby, and the Wolverine comic books created by Roy Thomas, Len Wein, and John Romita

I’ve talked before about the X-Men movies and how for the most part I like them a lot. I’ve also spoken about the atrocious X-Men Origins: Wolverine (2009) and how I did not care to watch the 2013 sequel The Wolverine. So when I learned that a third (and final?) Wolverine film named Logan was being produced, I shrugged it off. The first melodramatic trailer featuring Johnny Cash’s cover of Nine Inch Nails’ Hurt (2002) didn’t win me over either. But the story seemed to be about an older Wolverine (Hugh Jackman) on the run with a pint-sized mutant girl (Dafne Keen) with similar claws as his. Let’s say I was mildly intrigued. 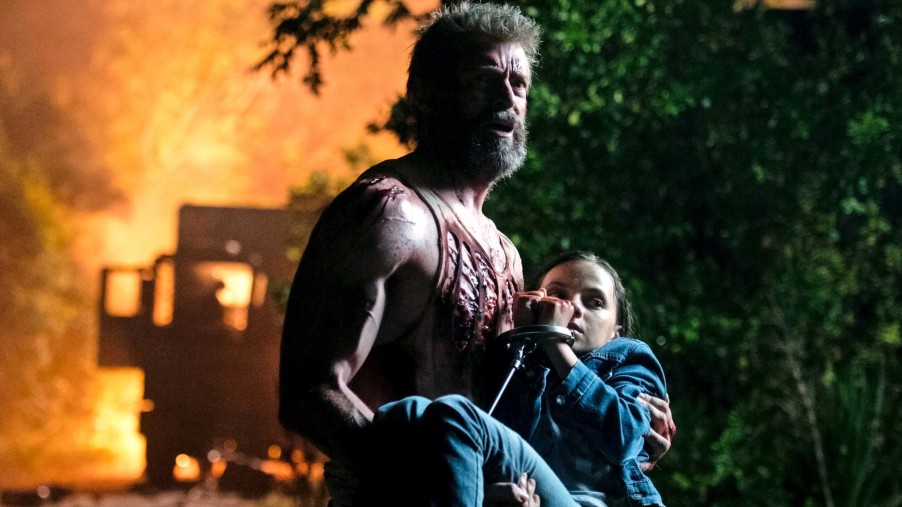 Turns out I was wrong. Logan is a fine, if unexpected, addition to the X-Men series. The year is 2029, few mutants are left, and a sick and tired Wolverine drives limos for a living while hiding out with fellow fugitives Caliban (Stephen Merchant) and Charles Xavier (Patrick Stewart), who is suffering from Alzheimer’s. Soon they find themselves protecting 11-year-old Laura from the evil biotech corporation that created her. And sure enough, she’s been cloned from Wolvie’s own DNA.

Their journey is a damn bloody one. In fact, director James Mangold has pointed to Clint Eastwood’s Unforgiven (1992) as a source of inspiration, and you can definitely see parallels between that film and Logan‘s no-nonsense approach to violence and mortality. Does he pull it off? For the most part, yes. Although not at the level of that Western, Logan effectively portrays Wolverine as a broken man whose salvation may be, in essence, his own daughter; Jackman digs deep into a character he’s played eight times before, uncovering new layers of longing and regret. And as usual, Stewart nearly steals the show as the ailing Xavier, now 90 and prone to seizures that unleash his powers with no warning, yet sharp enough to tell Logan to fuck off whenever the situation calls for it.

I was less enthused with the film’s middle section in which another clone is unleashed, killing a whole group of characters rather unnecessarily… among them Xavier himself. Wolverine’s final moments with his mentor/father figure end up feeling rushed and kind of cheap; couldn’t Professor X get a more fitting send-off, given his stature as one of the most important characters in the X-Men universe? I don’t know. From that point forward Logan loses some of its dramatic momentum, becoming a more standard action blockbuster that ends with the introduction of a whole new generation of mutants.

In any case, Logan‘s a breath of fresh air for anyone looking for a respite from more obvious superhero fare like Captain America: Civil War (2016) or the nonsensical Batman v Superman: Dawn of Justice (2016). And, truth be told, it probably has the single best final shot ever in the whole X-Men franchise. This X marks the spot.