On September 7th, 2017, Hurricane Irma passed north of Puerto Rico, a Category 5 storm that left around one million residents in darkness. Turns out that was a lucky break. Just thirteen days later Hurricane Maria made landfall on the island, its near-Category 5 winds devastating everything in their path. Homes were wrecked, the electric power grid virtually wiped out, and access to clean water and communications destroyed. As of this writing, the number of lives lost is said to have been in the thousands. It was a massive catastrophe for the small Caribbean territory, and in fact, for the United States in general.

The response from the federal government? Pretty much silence. Even though President Donald Trump issued a state of emergency, it would take five days for members of FEMA and Homeland Security to arrive at the island and begin assessments. Five days. (In comparison, 8,000 troops were sent to Haiti by President Barrack Obama within two days of the 2010 earthquake). And as the humanitarian crisis worsened – rural areas completely cut off from the rest of the island; a lack of gasoline and diesel to power everything from cars to generators; inoperative hospitals with patients waiting for surgeries; food and water supplies stuck at the barely-working airport; no clear distribution lines – it was evident that Puerto Rico was facing an uphill battle of almost insurmountable odds. 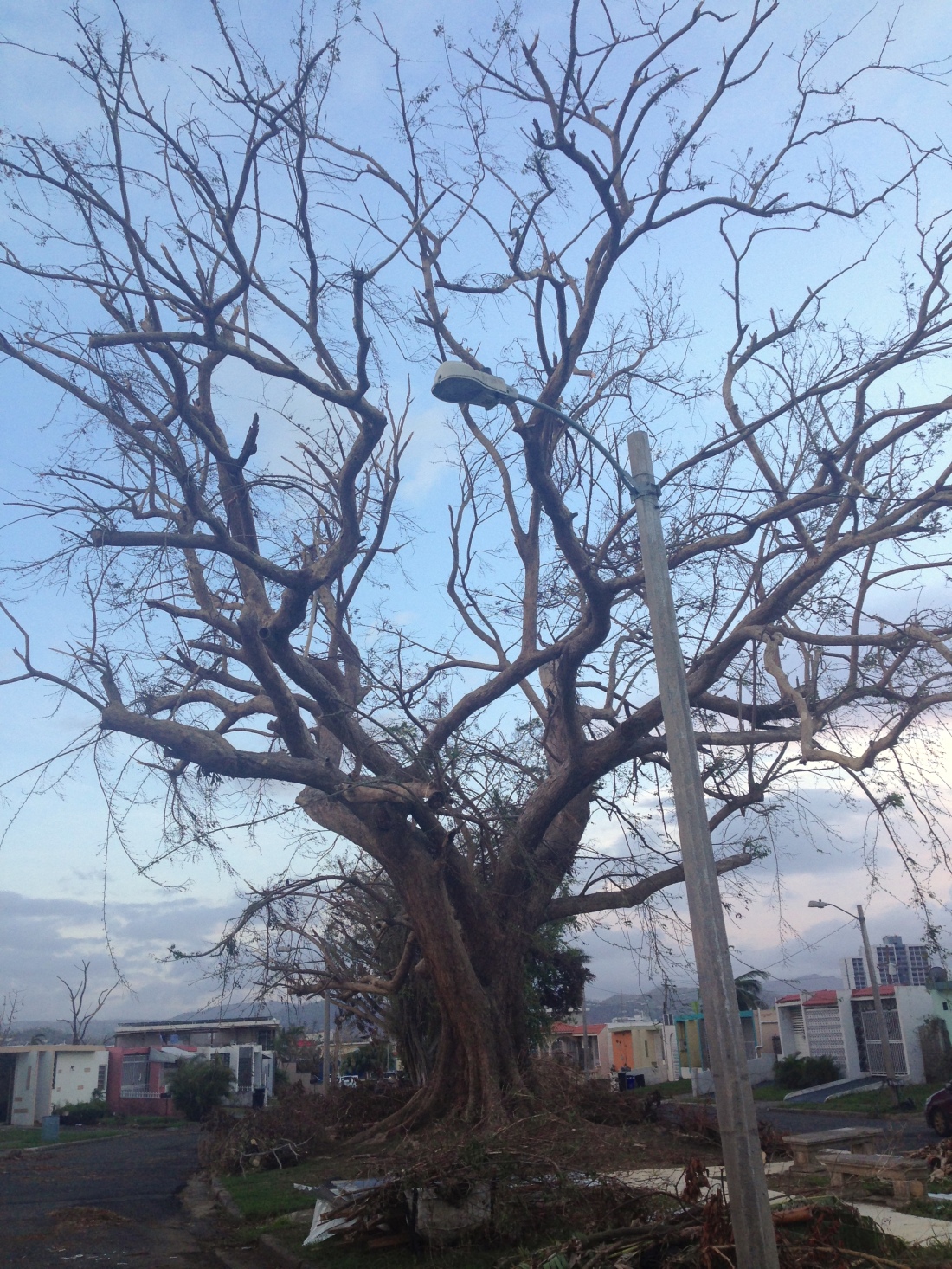 Remnants of tree outside my aunt’s house.

I flew to Puerto Rico 12 days after the storm with the intention of bringing my mother back to Florida, where I reside with my wife and son (I left the island in 1994). As the plane made it onto the runway, the crowd of boricua passengers started to cheer and clap loudly, as is customary among Puerto Ricans who fly back to the island. But this time, the cheering had an extra edge of longing and hope, as most of the travelers were going back to help their affected families. “¡Puerto Rico, puñeta!!” yelled one excited young man, making us laugh and bringing some levity to a horrific situation (it roughly translates to “Puerto Rico, fuck yeah!”). The flight attendant then spoke: “Welcome to San Juan. I am sure most of you are here to see your loved ones, and I hope we can all work together to rebuild our country.” I felt the tears well up in my eyes. 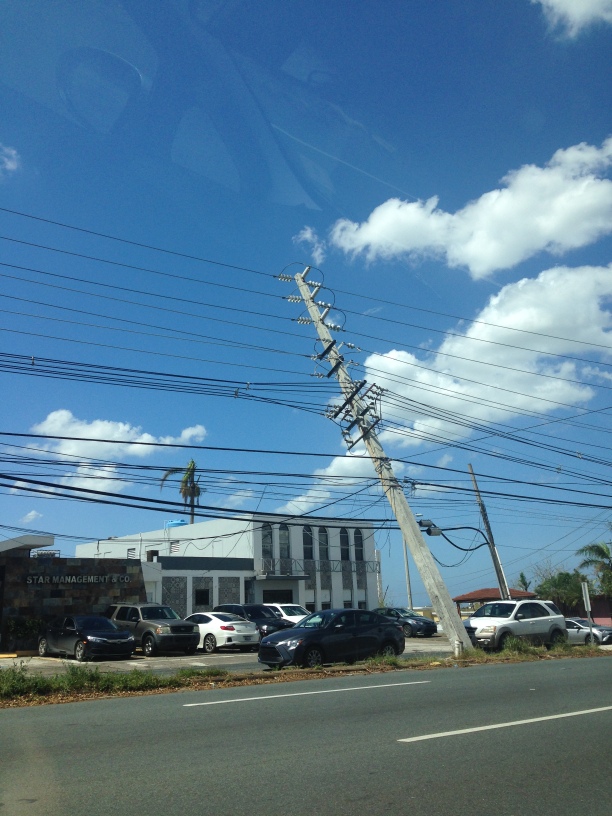 One of the few concrete poles still standing.

The airport was mostly operational, with crowds of people waiting for their bags, which I’m sure were filled to the brink, like mine, with flashlights, canned goods, bread, and other items. I could also see many travelers with portable generators, perhaps the most valuable commodity of all. I got my rental car and headed to my cousin’s house, where my mother was staying. Driving in the busy streets was like something out of Mad Max, a landscape of broken traffic lights, downed posts, and hundreds of cars trying to make it to their destinations. Somehow I didn’t witness any accidents and made it in one piece.

My family was frazzled and tired, but otherwise fine. More than anything, their faces expressed the shock of having seen a veritable force of nature destroy their country – and mine – and trying to come to terms with it. By 6pm it was already dark and we all sat in the balcony, flashlights in hand, watching the occasional car pass by and listening to the drone of the generators. Talk turned to all the frustrations surrounding the disaster: Trump arriving to oversee the rescue efforts, saying more people had died in Hurricane Katrina in New Orleans and throwing paper towels at the crowd; the inability of rescue efforts to get water and provisions to the most affected inland areas; the energy grid that should’ve been upgraded and fixed decades ago; the deep economic crisis that was now compounded by billions more in damage. This was a new reality.

It was too hot to sleep inside, so I crashed with my other cousin on an air mattress outside by the patio, open prey to the mosquitoes. I passed out immediately, too tired to really care.

People in line to buy ice bags at a gas station.

The next day my mother and I went back to her house, my home for so many years, and started to put things in some kind of order. We spent the week talking, cleaning, eating cans of soup, and getting food from the few local cafeterias and fast food joints that were running on fumes. This was going back to basics, a world with no infrastructure, no hot water, no air conditioning, no refrigeration, no internet connection, no Netflix binge session.

In many ways it was liberating. Days and nights passed just existing. Every night we’d turn on our flashlights and listen to the news on a small AM radio, hoping for any signs of improvement amid the cacophony of grimness. After a while my mother would go to sleep and I’d lay sweating on a couch on the floor of the living room, reading a few pages by the light of a weak lamp before falling into a restless slumber.

A week after we closed up the house and went back to FL, where my mom spent the better part of a month getting back to some sort of normal. It was nice, and she was able to spend a good amount of time with her grandson, as well as treating us to her home-cooked meals. We even had the chance to catch Santana in concert, a musician that she’d been waiting to see for a long time (you can read about my mom’s musical influences here). But after a month or so, she wanted to return to the island. Therapy was over. It was time to start again.

Children wait outside a fast food restaurant as cars line up for food.

I spent another week in PR – there was still no electricity at the house, but things had improved somewhat, with more businesses up and running and a general attitude of resilience and reconstruction. I helped my mother bulk up on water and gas for her portable stove, then flew back to FL, hoping that she’d be alright by herself. Some twenty days later, she finally got intermittent power back, and with it a semblance of order.

But that semblance of order is indeed just an illusion. As I finish writing this, it’s already May of 2018 and 150,000 homes and businesses are still waiting for power. Add to that a bankrupt economy with 70 billion dollars in debt, an unstable and fragile power grid that will take billions more to fix correctly, and decades of government corruption and mismanagement. That’s where we are.

And the sad truth is that Hurricane Maria left in its wake a much wider realization, one that people and governments don’t like to talk about but which is painfully clear: Puerto Rico is a colony. You can call it an “unincorporated territory” or a “commonwealth,” but let’s not kid ourselves, it’s a country wholly dependent on the United States, with one nonvoting representative in Washington, D.C. and no voice in presidential elections. Even its official “Estado Libre Asociado” designation is a bizarre lie/oxymoron, since Puerto Rico is not an “Estado” (State), nor can it exist as both “Libre” (Free) and “Asociado” (Associated) at the same time. Like George Carlin used to say, we’ve been “…bulshitted by the system into believing that if you change the name of the condition somehow you’ll change the condition.” Puerto Ricans have lived the same condition for hundreds of years, first as a colony of Spain and more recently as a colony of the U.S. Or as President Trump infamously described it in defense of his administration’s lackluster response to the hurricane, “…an island surrounded by water, big water, ocean water.” Thanks for the deep thoughts, Commander-in-Tweet (or Twit, take your pick).

Of course, there are no easy answers to any of these problems. As citizens, we are also at fault for having chosen a long line of mediocre, ineffectual leaders who’ve lined their pockets with cash and filled our heads with empty politiquería (politicking). But as our popular Puerto Rican phrase goes, “Hay que seguir pa’lante.” We can only move forward, and hope that we can find a way to rise above the countless challenges ahead. Perhaps it takes something like a hurricane of this magnitude to finally get woke and see things for what they are. We must stop being second-class citizens. Puerto Rico, puñeta, can do much more than rebuild. It can become a self-governing state with all the human rights and national sovereignty that it deserves.