Woody Grant is senile and alcoholic, a man whose aspirations deserted him a long time ago. He receives a letter saying he’s won a million dollars, but must pick up the prize in person in Lincoln, Nebraska (he lives in Montana). His son David (Will Forte) decides to drive him there, full aware there’s no pot of gold at the end of this rainbow, but hoping to connect to a father he’s always felt distant from. So begins a road trip similar to others seen in director Alexander Payne’s films, one filled with dysfunctional families (as in 2011’s The Descendants), ruminations on old age and relationships (as in 2002’s About Schmidt), and crazy misadventures (as in 2004’s Sideways). 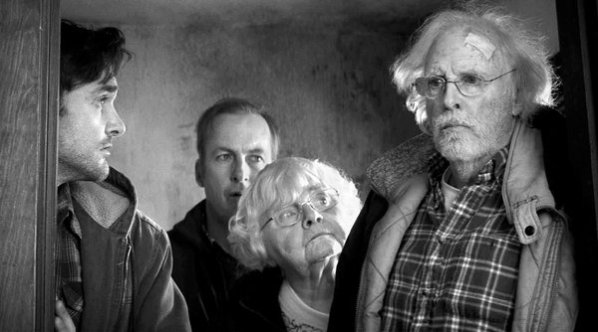 Nebraska has several aces up its sleeve: Bruce Dern gives a slow, quiet performance that speaks volumes under the surface; writer Bob Nelson and director Payne slowly let the audience fill in the blanks as to what kind of husband and father Woody was (not a stellar one). There’s the stark cinematography by Phedon Papamichael, perfectly capturing a Middle America in which the landscape echoes the unfulfilled dreams of many. And June Squibb steals the show as Woody’s fiercely idiosyncratic wife, a no-nonsense woman who has an opinion on everything and everyone. She makes the picture come alive in its funnier moments.

Perched somewhere between deep satire and heartfelt compassion, Nebraska is another example of Payne’s skills as a storyteller. I certainly look forward to the next one.