A strange thing must have happened during the production of Crimson Peak, because for a film directed by Guillermo del Toro, this one seems to lack his keen eye for detail and production design. The guy may have brought us the stylized worlds of El laberinto del fauno (Pan’s Labyrinth, 2006), two Hellboy movies (2004 and 2008), and Pacific Rim (2013), but Crimson Peak feels incomplete, with sets that don’t feel like real locations, cheesy special effects, and a ghost story that’s sadly lacking in suspense. You’d be more likely to jump at a black cat crossing you on the street. 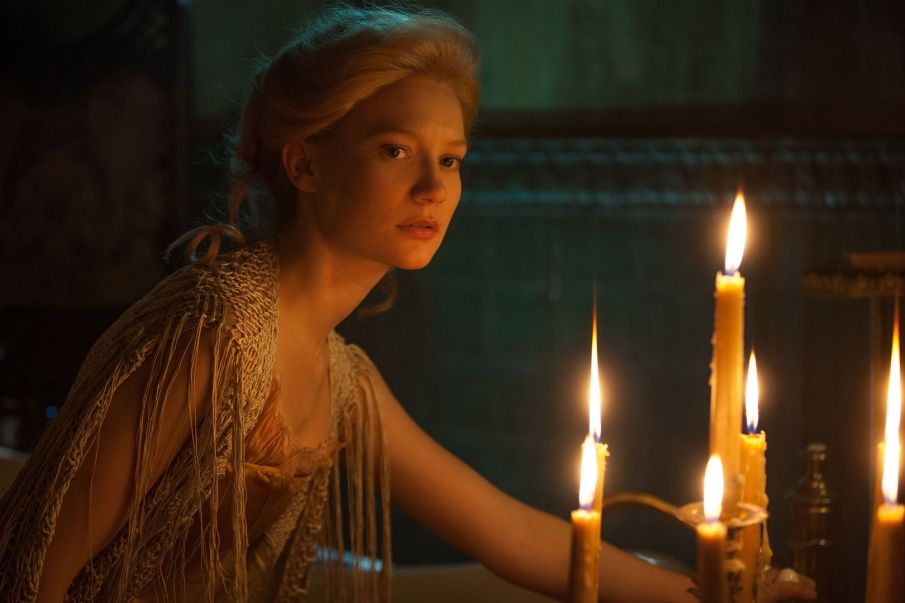 The plot involves a young American woman in the early 1900’s (Mia Wasikowska) who marries a British inventor (Tom Hiddleston) and moves with him and his sister (Jessica Chastain) to their dilapidated mansion in England. Once there she starts seeing otherworldly apparitions and eventually realizes the siblings may have some nefarious plans for her. All well and good, buoyed by the performances of three actors we know can deliver the goods (Chastain in particular seems to relish her turn as the sister-in-law from hell). But del Toro can’t seem to make up his mind as if what movie he’s making: Is it a gothic romance? A haunted house flick? A period thriller? Probably a bit of all three, and the results are wishy washy at best.

At one point Del Toro mentioned he wanted Crimson Peak to be a throwback to films such as The Innocents (1961) and The Haunting (1963), two films that I love. I wish he’d been successful. As it stands, you’re better off revisiting his superior horror film El espinazo del diablo (The Devil’s Backbone, 2001), or even better his executive-produced El orfanato (The Orphanage, 2007). The ghosts in those films don’t mess around.